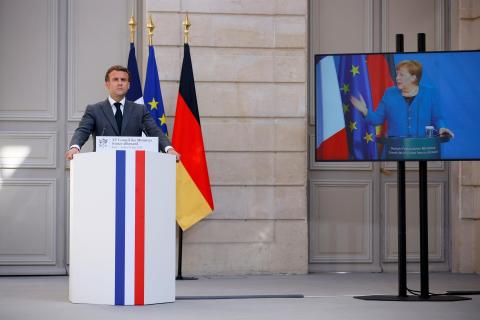 France, Germany and other European countries demanded answers on May 31 following reports the U.S. spied on its allies using Danish underwater cables, as questions mounted over whether Denmark knew about the operation.

In an investigative report on Sunday, Danish public broadcaster Danmarks Radio (DR) and other European media outlets said the U.S. National Security Agency (NSA) had eavesdropped on Danish underwater internet cables from 2012 to 2014 to spy on top politicians in France, Germany, Norway and Sweden.

"This is not acceptable between allies, and even less between allies and European partners," said Macron after the two leaders talked via video conference.

"There is no room for suspicion," said Macron, as he stressed the value of the ties between Europeans and Americans.

"That is why what we are waiting for complete clarity," from both Denmark and the U.S., he added. "We are awaiting these answers."

Merkel said she "could only agree" with Macron's comments, adding she was "reassured" by Danish Defence Minister Trine Bramsen's condemnation of any such spying.

Bramsen, who took over the defense portfolio in June 2019, has neither confirmed nor denied DR's report, but told AFP that "systematic eavesdropping of close allies is unacceptable".