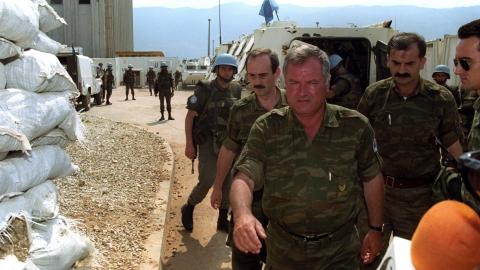 This is how the former chief prosecutor of the International Criminal Tribunal for the Former Yugoslavia, Carla Del Ponte, described the fugitive she hunted for more than a decade in order to bring him for trial for the first genocide on European soil since the defeat of Nazi Germany.

Next week, 26 years after he was initially indicted, the UN court in The Hague will deliver its final verdict in the trial of former Bosnian Serb Army general Ratko Mladic.

Mladic appealed after the court's first-instance verdict in 2017 sentenced him to life prison for the genocide of Bosniaks from Srebrenica in 1995, the persecution of Bosniaks and Croats throughout Bosnia and Herzegovina during the 1992-95 war, terrorising the population of Sarajevo during the siege of the city and taking UN peacekeepers hostage.

Mladic, now aged 78, was born in 1943 in the Bosnian village of Bozinovci, some 70 kilometres south of the capital Sarajevo.

He was the child of a Yugoslav Communist Partisan family, and his father was killed in one of the last battles of World War II. Mladic decided to follow in his footsteps and went to military school in Belgrade.

His military skills were first put to the test at the very beginning of the break-up of Yugoslavia, when the Yugoslav People's Army sent him to Croatia in the spring of 1991 to assist local Serb rebels in the town of Knin, which was a Serb stronghold at the time.

By the time Mladic was appointed commander of the 9th Yugoslav People's Army Corps in Knin in June 1991, the territory was already cut off from the rest of Croatia because the rebel Serbs, who had declared the establishment of their Autonomous Territory of Krajina statelet in 1990, had blocked the roads...