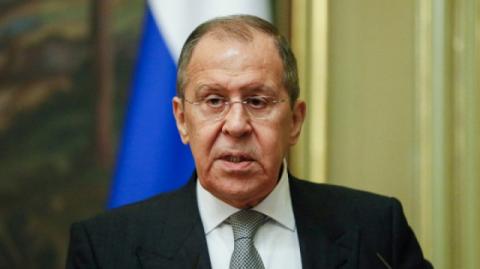 Russian Foreign Minister Sergei Lavrov has blamed the European Union for having suspended "the mutually beneficial architecture of cooperation" and for pushing to "shut Russia out," following a meeting with his Portuguese counterpart Augusto Santos Silva in Moscow.

Lavrov made the comments on Monday (31 May) following an "EU-Russia" meeting, organised in Moscow by the Russian International Affairs Council (RIAC) and the Portuguese presidency of the Council of the EU.

Describing the current state of EU-Russian relations using military terminology, Lavrov heaped all the blame for their deterioration onto the West.

"New dividing lines are again being created in Europe; they are moving further east and becoming ever deeper, like trenches on the front line", he said, according to an official transcript.

"Today [the] multilevel, mutually beneficial architecture of cooperation has been suspended, to put it mildly, at the EU's initiative. The EU has decided to shut Russia out", Lavrov said.

He repeated the Russian narrative, according to which the pro-Western revolution in Ukraine was a coup d'état fomented by the West, not mentioning the annexation by his country of Crimea and the installation of pro-Russian puppet regimes in the Ukrainian provinces of Donetsk and Lugansk.

Russia has been resorting to the argument of "plausible denial" when Western law-enforcement authorities have pointed the finger at Moscow's involvement in a number of diplomatic incidents.

These include a number of assassination attempts on European soil using Novichok, a military-grade poison, an explosion in an arms deposit in the Czech Republic in 2014, and most recently, the forced landing in Minsk of a flight carrying a Belarusian dissident...