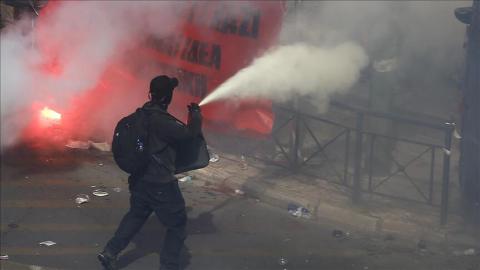 Turkish Cypriot President Ersin Tatar said May 31 there was a significant increase in votes for the far-right ultra-nationalist National Popular Front (ELAM) in the latest legislative elections in the Greek Administration of Southern Cyprus (GASC).

The leader of the Turkish Republic of Northern Cyprus (TRNC) was speaking to Anadolu Agency on the results of the polls held Sunday.

"Our discourse that there cannot be a federalism-based solution to the Cyprus problem has been confirmed," he said.

ELAM and its supporters advocate a unitary Cyprus in which Cypriot Turks would not even have minority rights, he said, noting the party draws most of its support from young people in southern Cyprus.

Tatar underlined that the reasons behind ELAM's popularity among young people are the promotion of extreme Greek nationalism and the ideals of EOKA, the terrorist organization that was responsible for attacks on Cypriot Turks between 1957-1974.

"Children and youth of Greek Cypriots are indoctrinated with Greek nationalism that claims Cyprus is a Greek island and it eventually should be united with Greece. As such, I recognize our new vision of a two-state solution as a realistic solution that fits into the realities of Cyprus," he maintained.

Tatar said the U.N. and other involved parties in the 5+1 Cyprus talks in Geneva should recognize that a federal solution for the island is not feasible anymore, as shown by the election results in the GASC.

"We will not accept an agreement that is based on federalism. We will be keen in defending a two-state solution that is supported by Turkey," he added.

The ultra-nationalist ELAM party and the centrist DIPA made significant gains in legislative elections held Sunday.