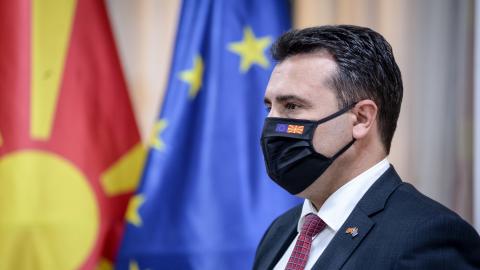 Zaev's ascent to power can be traced to his starring role in lifting the lid on the corruption, meddling and abuse of power that had become widespread in Gruevski's regime, when the Social Democrat leader began feeding intelligence service wiretaps to the media in a series of sensational press conferences in 2015.

Rocked by revelation after revelation, Macedonia, as it was then known, was plunged into political crisis, marked by anti-government protests, police brutality and pro-government counter protests that culminated in the bloody storming of parliament in April 2017 by Gruevski's supporters.

Zaev was among those beaten in the mayhem, cementing the image of a man ready to shed blood to rid the country of Gruevski and his cronies. But not everyone bought the story of Zaev as a wealthy yet honest man, a naïve do-gooder and committed Orthodox believer from a big family.

This was due, in part, to the fact that Zaev was not exactly a newcomer to the political scene. He had baggage.

In 2008, Branko Crvenkovski, a former leader of the Social Democrats and at that point president of the country, amnestied Zaev after he was accused of wrongdoing in the awarding of a tender for construction of a shopping mall in the southeastern town of Strumica, where Zaev was mayor.

In 2015, during the wiretaps crisis, a police surveillance video surfaced on social media in which Zaev purportedly told a businessman to 'donate' an extra two euros per square metre of land he wanted to buy in Strumica, "one to the church and one to Viceto", Viceto being Zaev's brother, Vice Zaev.

Zaev was charged with soliciting a bribe of 200,000 euros but was acquitted in 2018. He consistently denied any wrongdoing, but his acquittal did little to dispel...