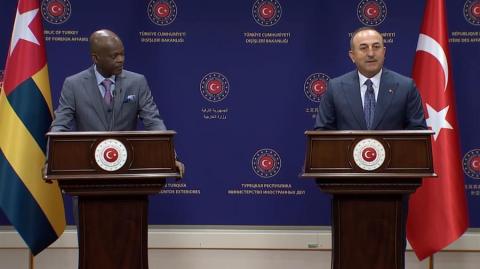 If Israel wants healthy ties with Ankara, it must abandon its wrongful policies and end violence against Palestinians, Turkey's foreign minister said on June 2.

"In order for Israel to maintain a healthy relationship with us, no matter which government is in power there, it must first give up its wrongful policies," Mevlüt Çavuşoğlu said at a press conference along with Robert Dussey, the foreign minister of Togo, in the capital Ankara.

Israel's violence and aggression against Palestinians will only "worsen [our] ties," he added.

Çavuşoğlu stressed that Israel can have "healthier relationships with everyone" if it pursues peace, accepts a two-state solution, and respects the rights of Palestinians.

Israel's latest assault on the Gaza Strip and the occupied West Bank last month killed at least 289 people, including women and children, and left a trail of destruction.

Health centers, schools, and media offices in the Palestinian territories were among the structures that Israeli forces targeted and destroyed with impunity.

Togo's foreign minister said many schools previously run by the FETÖ in the west African country have been handed over to Turkey's Maarif Foundation.

He appreciated the foundation's role in providing quality education to children in Togo.

Ankara established the Maarif Foundation after the defeated 2016 coup in Turkey to take over the administration of overseas schools linked to FETÖ.

The terror group and its U.S.-based leader Fetullah Gülen orchestrated the defeated coup of July 15, 2016, which left 251 people dead and 2,734 injured.

Ankara accuses FETÖ of being behind a long-running campaign to overthrow the...