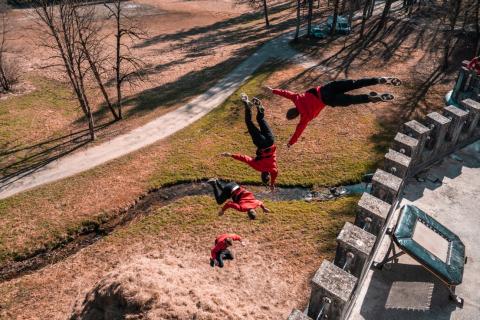 Stari Trg pri Ložu – The Slovenian acrobatic group Dunking Devils has pulled off another dizzying and breakneck feat. This time, they were jumping from a height of 17 metres onto a huge pile of hay. The backdrop for this “leap of faith” was provided by Snežnik Castle.

The Devils borrowed a scene from the Assassin’s Creed computer game as the inspiration for their new stunt, illustrated by the title Leap of Faith. That is the name of a trick in the game where the main character jumps from a dizzying height onto or into a soft surface.

The Dunking Devils acrobats decided to bring the manoeuvre into real life. As part of their video series, the stunt was performed at Snežnik Castle. Short clips from the filming have reportedly already received more than 20 million views on TikTok.

First they jumped from the walls, then from a platform lifted into the air by a crane, reaching the final height of 17 metres. On the ground, there was no landing cushion or pool – only a huge pile of hay, which successfully accomplished the task, cushioning the landing and preventing injuries.

Four tonnes of hay were piled under the walls to provide a soft landing surface. The weather forecast was closely monitored before filming, as rain and wet hay would have made the stunt impossible. They have also posted footage of the jumps on their YouTube channel.