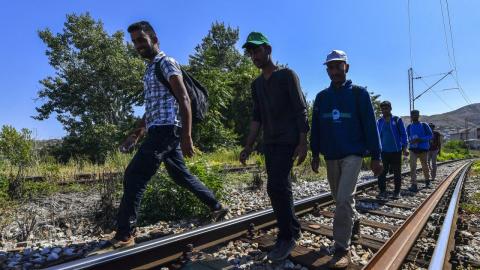 North Macedonia's police searched 11 premises in the capital Skopje and in the towns of Veles, Stip, Strumica and Valandovo on Wednesday, arresting six suspected members of a migrant-smuggling group.

The Organised Crime Prosecution said the group was led by a 33-year-old resident of Veles, a town in the central part of the country.

According to the prosecution, the group smuggled migrants from Afghanistan, Pakistan, Syria, Bangladesh and Middle Eastern countries through North Macedonia and had been charging from 500 to 700 euros per person.

They had been using illegal border crossings in the vicinity of the southern border town of Gevgelija to smuggle the migrants from Greece into Macedonian territory.

After transporting the migrants through the country, they were hiding them in the regions of Lipkovo and Kumanovo, near the country's northern border, before transferring them illegally to Serbia in the north and one step closer toward their final goal of reaching EU countries.

The prosecution explained four other members of this criminal group are already serving jail sentences for smuggling migrants.

The southern border with Greece has long been the main entry point both for legal and illegal entries for many refugees and migrants from the Middle East who cross North Macedonia towards Central and Western Europe.

At the height of the migrant crisis in 2015 and 2016, North Macedonia erected a fence on parts of its border with Greece as more than a million people crossed the border and transited the country, according to estimates. The army and the police has since maintained a heightened presence there.

The northern border with Serbia is another...

Illegal migration down by 40% in first seven months y/y