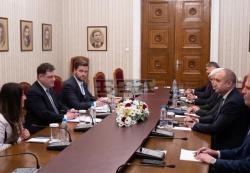 Speaking during a meeting here on Wednesday with the US Department of Treasury's Principal Deputy Assistant Secretary, Paul Ahern, which was also attended by the US Ambassador to Bulgaria Herro Mustafa, President Rumen Radev said that achieving effective results in the fight against corruption requires a concerted effort by partner countries, Radev's Press Secretariat reported.
The President pointed out that the Bulgarian society is at an important moment in its development and that there are huge expectations by citizens to regain their trust in the State and for more transparency from institutions.

"That is why we want the people who hold important positions in the country's government to be open, as well as all magistrates. To have transparency regarding their bank accounts and their property, be it in Bulgaria or abroad," Rumen Radev stressed.

According to him, investing in transparency and the fight against corruption protects not only national security, but also economic interests and civil liberties. The restoration of the business environment in Bulgaria also depends on decisive steps in this direction, the press release said.
A common position was expressed on the need for an even more active partnership between Bulgaria and the United States in the  fight against organized crime and corruption and in strengthening the rule of law.