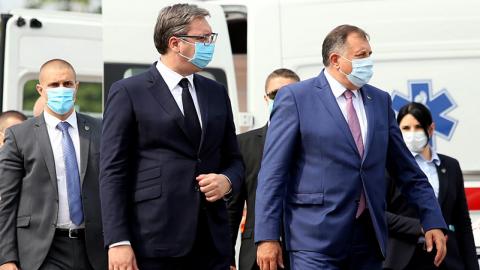 Serbian President Aleksandar Vucic said on Wednesday that from now on, Belgrade wants to see regular reports from the High Representative, the official tasked with overseeing the implementation of the 1995 Dayton peace deal that ended the war in Bosnia and Herzegovina.

Vucic made the announcement after meeting senior officials from Bosnia's Serb-dominated entity, Republika Srpska, who have repeatedly said that they want the High Representative's position closed.

Vucic said that Serbia is entitled to receive the reports under Annex 10 of the Dayton peace agreement. Bosnia and Herzegovina, Croatia and Yugoslavia were parties to the agreement.

"Serbia will start behaving in a way that it has not done so far, and in accordance with what has been signed [in the Dayton agreement]," Vucic said.

"In accordance with that, the obligation of the High Representative is to periodically report to the United Nations, the European Union, the United States, the Russian Federation and other interested governments, as well as the parties [to the agreement] - and we are an interested party," he added.

Officials from Republika Srpska asked to meet Vucic in Belgrade because of the recent appointment of Christian Schmidt as the new head of the Office of the High Representative.

After the meeting, Republika Srpska's most powerful politician, Milorad Dodik, the Serb member of the tripartite Bosnian presidency, restated his opposition to the High Representative.

"The Office of the High Representative in Bosnia should be closed," Dodik said.

"The international community's experiment in Bosnia and attempts to appoint a new high representative must be stopped," he added.

He said the new high representative would have no legitimacy...