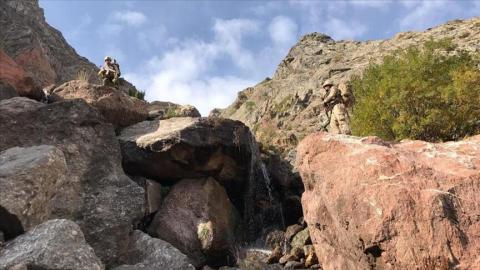 According to the Governor's Office, the soldier died in hospital after being injured in an anti-terror operation carried out by the Provincial Gendarmerie Command teams in the Anadere village countryside of Tatvan district.

"An air-supported operation is carried out to neutralize the separatist terrorist organization members fleeing the conflict zone," the statement added.

The Governor's Office also stressed that the security forces increased their operations throughout the province to ensure peace and security and continue the fight against terrorism with determination.

The terrorists fired a rocket from Iran to target Turkish teams that were carrying out minesweeping works on the road to ensure the safety of companies working in the construction of modular concrete walls in the Yüksekova district of Hakkâri province, the ministry said on Twitter.

"There are no casualties in our units," the statement added.

Turkish authorities use the word "neutralized" in statements to imply terrorists in question either surrendered or were killed or captured.

US and EU Will Create Council on Russian Policies

Biden, Erdoğan to discuss their differences next week: White House