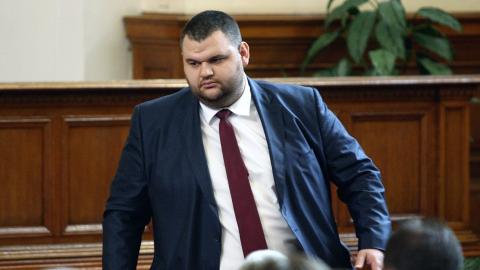 Bulgarian media mogul and MP from the centrist Movement for Rights and Freedoms, Delyan Peevski, during a meeting at parliament in Sofia, May 2013. Photo: EPA/STR.

The first man named is oligarch-in-exile, art dealer and former football and gambling boss Vassil Bojkov, alias The Skull, who fled the country to Dubai in January 2020 amid numerous charges.

The second is media mogul and former MP from Movement for Rights and Freedoms party Delyan Peevski, who is also based in Dubai and is associated with various businesses, including infrastructure and real estate companies.

The third man, Ilko Zhelyazkov, is the former deputy chief of the Bulgarian State Agency for Technical Operations, the country's covert intelligence-gathering service. Zhelyazkov was also appointed to the National Bureau for Control on Special Intelligence-Gathering Devices by the previous government of Prime Minister Boyko Borissov.

Right after the announcement, Peevski made a statement denying any wrongdoing.

"I have not engaged in any corrupt activity," he told Pik.bg, a website that often portrays him positively.

Peevski also said that his US-based lawyers will look further into the matter and will take "every legal action" to combat the US administration's decision.

Bojkov and Zhelyazkov have not commented so far.

According to the US Treasury, "Peevski used Zhelyazkov to conduct a bribery scheme involving Bulgarian residency documents for foreign persons, as well as to bribe government officials through various means in exchange for their information and loyalty".

Although not stated, Zhelyazkov's presence on the list is also believed to be connected with recent claims that opposition parties were continuously bugged by the 2017-2021...