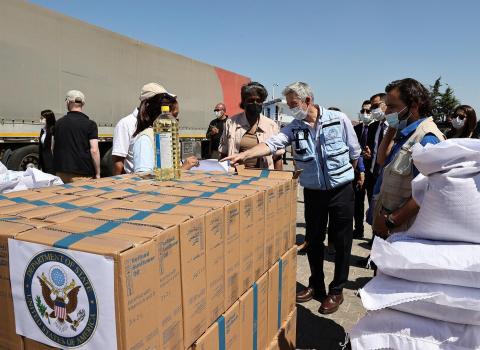 Thomas-Greenfield visited the distribution center of the U.N. World Food Program (WFP) on June 3 in southern Hatay, where she had official contacts.

"Right now, this door [Cilvegözü] is the best option for the international community. If it closes, it will cause many cruelties," she said, speaking to the press after making contacts at the distribution center.

"I am happy to announce that the United States will provide an additional $200 million in financing for Syrians," Thomas-Greenfield said.

She thanked the Turkish government for hosting Syrian refugees. "I thank you not only for hosting the refugees but also for supporting the operation of this distribution center here," the envoy added.

She stated that they were holding talks with the UN Security Council, Russia and Turkey at the moment to open the border gates for humanitarian aid, adding, "U.S. Secretary of State Tony Blinken said that we will continue to work for the continuation of aid efforts."

Linda Thomas-Greenfield's visit comes ahead of the July 10 expiration of the U.N. Security Council mandate for humanitarian aid deliveries, now reduced from four initial international crossing points to a single border crossing from Turkey to Syria's rebel-held northwest at the insistence of Russia, Syria's closest ally.

"Turkey is a valued strategic partner and NATO ally. Over the coming days, I look forward to productive meetings with Turkish leaders on issues of mutual importance, particularly Turkey...