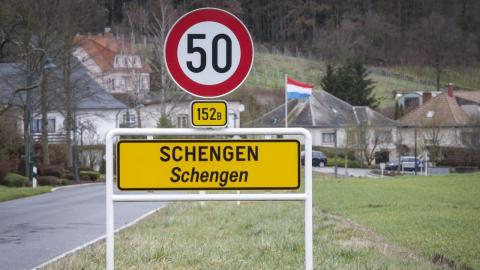 The European Commission unveiled a set of proposals on Wednesday aimed at improving the functioning of the Schengen free travel area, including a demand that EU member states expedite the admission of Romania, Bulgaria, Croatia and Cyprus.

"The strategy… calls for completing the enlargement of the Schengen area, so that Bulgaria, Romania, Croatia and Cyprus can fully benefit from Schengen," said the strategy document, entitled 'Towards a Stronger and More Resilient Schengen Area'.

EU members' accession to Schengen is decided by the European Council and requires the unanimous approval of all the EU governments on it.

The Commission called on the European Council to "decide on lifting controls for Bulgaria, Romania and Croatia, and integrate them into the Schengen area".

It said that Bulgaria and Romania "successfully completed the required evaluation in 2010 and 2011".

The Commission also said it confirmed in October 2019 that Croatia "had taken the measures needed" to comply with the conditions required to join the border-free area, including those on controlling its external borders.

"A more inclusive Schengen area will increase security for the EU as a whole while also fulfilling these countries' legitimate expectation… to join Schengen," the Commission wrote.

It also said that Schengen enlargement was a way towards "reinforcing mutual trust" between EU members.

The Commission also demanded the same treatment for Cyprus "once it has completed the required evaluation".

Romania and Bulgaria joined the EU in 2007. They have since repeatedly been barred from becoming part of the free travel area. The veto has come from countries like France the Netherlands, whose governments cited the two younger members...