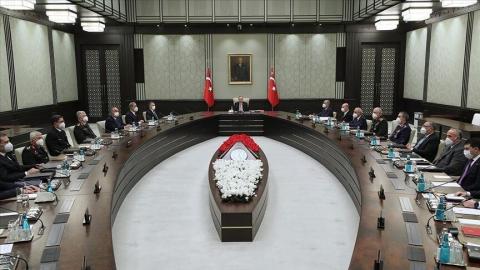 Turkey's National Security Council on June 2 called on the international community to fulfill its responsibility to find a just and permanent solution to the Palestinian issue.

The security council condemned Israel's illegal occupation of Palestinian lands and its attacks on the civilian population.

An Egyptian-brokered truce that took effect in the early hours of May 21 ended Israel's 11-day bombardment of the Gaza Strip.

Israeli attacks in Gaza and the West Bank killed at least 289 people, including women and children, and left behind a trail of destruction. Health centers and media offices, as well as schools, were among the structures targeted.

The council also stressed that military operations along the country's southern border will decisively continue to neutralize terror groups and to ensure uninterrupted safety.

Turkey launched operations Pence-Simsek and Pence-Yildirim on April 23 in northern Iraq's Metina and Avaşin-Basyan regions near its borders.

In its more than 35-year terror campaign against Turkey, the PKK - listed as a terrorist organization by Turkey, the U.S., and the EU - has been responsible for the deaths of at least 40,000 people, including women, children, and infants.​​​​​​​

During the meeting, the operations carried out with determination and success at home and abroad...