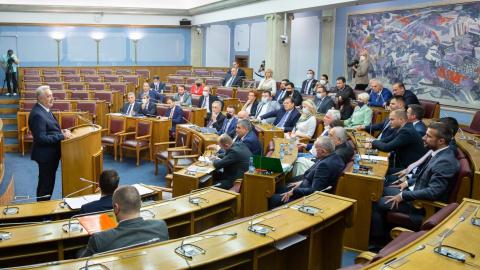 The budget legislation was sent to parliament on March 31, but the voting was put on hold as the largest ruling majority bloc, For the Future of Montenegro, called Prime Minister Zdravko Krivokapic for negotiations on Government reconstruction.

"Because parliament didn't adopt the Montenegrin state budget, the police are already left without 130 cars which were leased in 2018. In this situation, maintaining regular police activities is really difficult," Sekulovic said in a press release on Thursday.

On March 31, the government proposed a budget of 2.4 billion euros, which is 4.9 per cent lower than last year's budget.

But on May 20, the Democratic Front, which is part of the For the Future of Montenegro ruling bloc, called for negotiations about a government reshuffle and urged Krivokapic to include ruling majority party leaders in its cabinet.

This is not first time that Montenegro's coalition government has faced internal troubles. The Democratic Front has already criticised Krivokapic for poor cooperation with ruling majority parties during the appointing of police officials.

Montenegro is run by a so-called expert government which came to office in December 2020 after elections in the summer.

Reshuffle or Election Only Options Left for Montenegrin Government