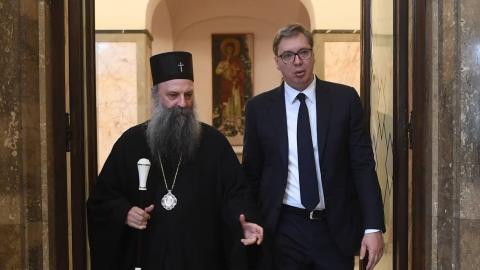 Successive governments under the control of current President Milo Djukanovic signed similar agreements with smaller religious communities in the country (Catholic, Islamic and Jewish), but not with the SOC, with which it developed an increasingly confrontational relationship in the last decade.

In addition to the question of the Concordat between the Montenegrin state and the SOC, the passing of Amfilohije, the Metropolitan of Montenegro, on October 30, 2020 raised the politically important question of his succession.

In the last week of May, a combined barrage from Serbian tabloids and the Democratic Front - an instrument in Vucic's attempted hostile takeover of the government in Montenegro - accompanied the visit of Montenegrin Prime Minister Zdravko Krivokapic to Belgrade.

The aim of these attacks was to force a humiliated Krivokapic into signing the Fundamental Agreement with the SOC in Belgrade, under the commanding eye of Vucic (not in Montenegro in the Cetinje Monastery, seat of the SOC in the country). Equally problematic was the fact that the draft text of the agreement had not been seen by the main partners in Montenegro's ruling coalition of Montenegro, nor discussed with the wider population.

Since the rest of the Montenegrin government would find it extremely difficult to digest the Serbian president's diktat and an opaque deal, the prospect of the prime minister signing the agreement in Belgrade would most likely have brought down the government.

Additionally, Krivokapic was presented with what was to prove to be a bluff ultimatum: either he signed the agreement in Belgrade or Bishop Joanikije, late Metropolitan Amfilohije's closest collaborator and a critic of Vucic, would not be elected head of the SOC in...