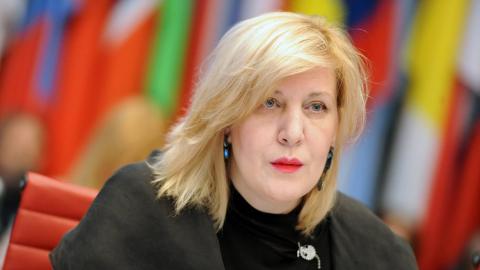 Strasbourg – Council of Europe Commissioner for Human Rights Dunja Mijatović urged the Slovenian authorities in a memorandum published on Friday to put a stop to the deterioration of the situation regarding media freedom and freedom of expression in the country.

In the context of media freedom, she pointed to harassment, intimidation and criminal lawsuits against journalists. She also highlighted “sexist harassment and misogynistic speech against female journalists” and the government’s attitude to public media.

The commissioner stressed that public service media served a specific role in a democratic society, by providing reliable information to all segments of the population.

She said she regretted the moves of the Slovenian government that “risk undermining the independence, credibility and financial stability of the public broadcaster RTV and the national press agency STA”.

“It is of paramount importance for media freedom in Slovenia to preserve the national independent press agency, and I reiterate my call to the Slovenian government to urgently re-instate adequate public funding for STA,” said the commissioner.

According to her, the recent deterioration of media freedom in Slovenia is happening in the context of systemic weaknesses in the regulation of the media market in the country, which should be addressed in order to bolster independent, high quality and diverse journalism.

She recommends increasing the transparency of media ownership, addressing conflicts of interest between political parties and media outlets, and setting up a mechanism to ensure more effective regulation of the media market.

Mijatović also urged the Slovenian authorities to stop the deterioration of the situation concerning freedom of expression. She warned that “some steps taken by the Slovenian government in recent months risk undermining the ability of independent voices to speak freely”.

She stressed that hostile public discourse, as well as smear campaigns and intimidation targeting civil society activists and those who express critical opinions, harm free expression.

The commissioner urged the Slovenian authorities to take action to appease tensions in society and to encourage mutual respect in the exchange of opinions. Noting the specific responsibility of political leaders in this regard, she said members of the government in particular must make a responsible and dignified use of social media platforms.

“Members of the government must refrain from making stigmatising and misleading comments about the work of civil society, and should publicly condemn such discourse by others”, she said.

The commissioner also expressed regret that the Slovenian government “appears to have used the Covid-19 pandemic to discourage the free expression of dissent or political opposition”. Several measures restricting the right to protest, including prolonged blanket bans on public assemblies and heavy fines imposed on protestors, seem disproportionate and risk undermining freedom of expression, she said.

She urged the authorities to find the proper balance in order to uphold the right to freedom of peaceful assembly.

As part of preparation for the report, Mijatović held talks with President Borut Pahor and several ministers in April but not with Prime Minister Janez Janša. She also talked to journalists of different media, politicians, experts and representatives of the civil society.

He noted the Interior Ministry had made its comments on the report. These comments are now being collected at the Foreign Ministry, as the report gives recommendations to other ministries as well. “Of course we will categorically deny all incorrect or faulty claims.”

Hojs believes the majority of the report “like most of the things that Slovenian journalist export to Europe” was partly created in Slovenia.

He said he had explicitly highlighted three attacks on journalists in talks with Mijatović which were not mentioned in the report, but a completely different case was. “So this is extremely unusually and extremely untrustworthy,” he said.

The opposition Marjan Šarec List (LMŠ) said the debate on the media should be put in a wider context. “The rule of law, personal rights and freedoms, independent branches of power and media freedom – these are all pillars of democracy, which should never be claimed by individual parties, traded with, let alone used as a tool against those with different views.”

Tanja Fajon, the head of the opposition Social Democrats (SD), said on Twitter that the commissioner would hear criticism that she was biased although she was a voice of an international organisation that should be taken utterly seriously. The government definitely sees the media as a priority. However, it does not strive for their freedom but subjugation, she said.