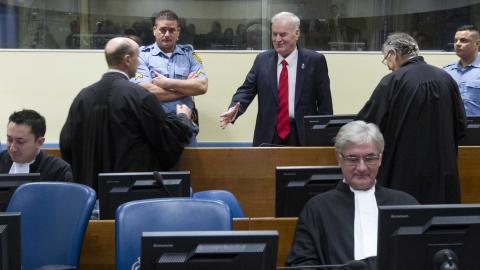 The death of Milorad Pelemis, wartime commander of the Bosnian Serb Army's notorious 10th Sabotage Detachment, on April 23 in Serbia received major coverage in the country, with many domestic media stressing what they described as his "heroic" actions during the Bosnian war.

Accusations that Pelemis played a role in the 1995 Srebrenica genocide were played down. But courts have already established that the 10th Sabotage Detachment massacred at least 1,000 Bosniaks from Srebrenica at Branjevo Farm in July 1995.

The Bosnian court has sentenced five of the 10th Sabotage Detachment's members to a total of 122 years in prison for their involvement, but Pelemis was not one of them.

He lived in Serbia after the war ended, and was tried for allegedly plotting to assassinate Yugoslav President Slobodan Milosevic, but he was never indicted for the Srebrenica genocide or any other crimes committed during the Bosnian war.

The Srebrenica genocide, in which some 8,000 Bosniak men and boys were killed, is one of the crimes for which Bosnian Serb Army commander Ratko Mladic is awaiting his final verdict at the UN court in The Hague on June 8.

Over 40 people have been convicted of Srebrenica crimes by the Hague Tribunal and domestic courts in Bosnia and Herzegovina and Serbia.

Around 40 more former Bosnian Serb Army soldiers who have either been indicted for or convicted of war crimes are living freely in Serbia and are unavailable to the Bosnian judicial authorities.

Serbia and Bosnia and Herzegovina do have an agreement on legal cooperation, but Serbia does not extradite its citizens to other countries. War crimes are a particularly problematic issue in this relationship.

Some of those who are wanted have been living...