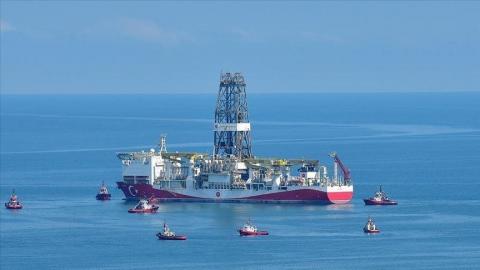 The increasing exploration and drilling efforts for new wells after Turkey's Fatih drillship discovered 405 billion cubic meters (bcm) of natural gas in the Black Sea is about to bear fruits with further gas volumes.

Turkish President Recep Tayyip Erdoğan will announce the recent developments in the field, which is expected to be about a new gas discovery.

Fatih drilled Turkali-1 and Turkali-2 testing wells after the big discovery along with the Amasra-1 well, which is an exploration well.

Turkey's Black Sea gas find was the largest offshore gas discovery in the world last year, while it was the second-largest in overall findings.

Another drillship, Kanuni, is currently carrying out completion tests at the Turkali-2 well while Fatih is drilling testing the well of Turkali-3.

Erdoğan announced he will have a video link with the Kanuni drillship today.

The first gas production from Sakarya Gas Field is planned for 2023.

Around 155 kilometers of the pipeline will be built from underneath the sea to Filyos onshore in Zonguldak, a port city in the Black Sea.

Turkish Petroleum will invest 780 million Turkish Lira only in the production and transmission facilities concerning the field. However, the overall investment volume in the Sakarya Gas Field is not publicly announced.

The pipeline will carry the natural gas produced underneath...