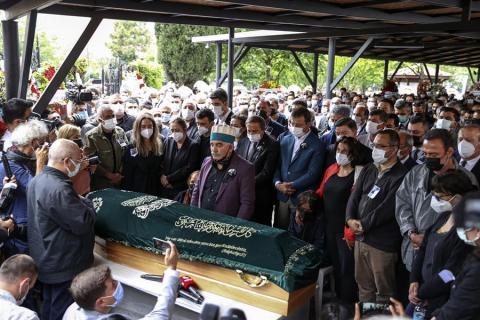 The funeral of producer and founder of Kalan Music, Hasan Saltık, who died of a heart attack at the age of 57 on June 2 in the Bodrum district of Muğla, was laid to rest on June 4 in Istanbul's Küçükyalı Cemetery.

Before the funeral ceremony, a ceremony was held for Saltık at the Kartal Cemevi (Alevi worship place) on
June 3. Many of his friends and artists, including Ali Rıza Binboğa, Volkan Konak, Kenan İmirzalıoğlu and Şevval Sam attended the ceremony there.

Behzat Şahin, friend of Hasan Saltık, said, "He was Turkey's cultural ambassador, art ambassador, archaeologist of lost music, who contributed not only to himself but to the whole world. Death is untimely for everyone, but Hasan's is completely timeless."

Born in Tunceli in 1964, Saltık compiled rare examples of classical Turkish music as well as Anatolian,
Caucasian and Balkan folk music. He produced more than 1,000 albums and carried out important works in the music market for nearly 30 years.

Saltık founded Kalan Music in 1992 and released the works that were important for ethnomusicological studies. He compiled them from collectors, who held archival records that were about to be forgotten, and from former musician families.