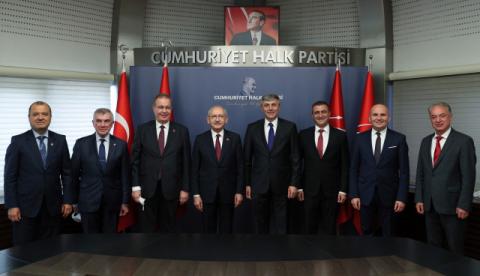 Delegation of Bulgarian "Movement for Rights and Freedoms" led by leader Mustafa Karadayi, is in Ankara. They held talks with Turkey's officials.

During the talks with MRF delegation  deputy chairman of ruling Justice and Development Party Numan Kurtulmus underscored that he saw the MRF's visit as an important step in the establishment of good dialogue for the development of bilateral relations and also in the Balkan region.

Kurtulmus assured the delegation that Turkey will put in place all conditions so that voters living in Turkey who hold Bulgarian citizenship can exercise their right to voting in the polling section on the territory of Turkey.

"The existence of the Bulgarian Turks and the continuation of the mutual dialogue with them is of benefit both to Turkey and
to them. We don't see Turkey as consisting only of Turkey. What we call the wealth of our nation are not only the 84 million
citizens of the Republic of Turkey," said Kurtulmus, expressing hope for even greater success of the MRF in the July 11 elections.

The Bulgarian guests met with the leader of the main opposition Republican People's Party Kemal Kilicdaroglu and senior representatives including MP Yuksel Ozkan, who is an emigrant from Bulgaria. The sides discussed issues related to boosting cooperation.