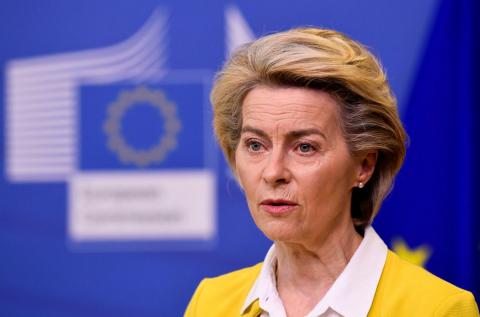 Brussels – European Commission President Ursula von der Leyen described today’s meeting with President Borut Pahor ahead of Slovenia’s presidency of the Council of the EU as very constructive, saying she appreciated “the enormous energy with which the presidency will work on the resilience and recovery of the European Union after this heavy pandemic”.

After the negative impact of the pandemic on the European economy, “now it’s time to recover, to invest and to reform”, von der Leyen said in a short video clip that Pahor posted on his Twitter account. There was no opportunity for reporters to ask her questions directly after the meeting.

She said the second topic of her discussion with Pahor was the Conference on the Future of Europe. She was “very grateful to the president for his bridge-building capacity, to move forward the unity of the European Union and to discuss and embrace the future”.

The video clip was then also posted on Twitter by von der Leyen, along with a message saying that Slovenia’s will be a “crucial presidency, as national recovery plans should be approved fast so #NextGenerationEU funds start flowing as of this summer”.

She said she and Pahor “agree that the future of the Western Balkans is in the EU and we want to make progress”.

Pahor’s office said the meeting with the president of the European Commission was held in the spirit of their long-term acquaintanceship, it was candid and substantive.

The president shared with von der Leyen his view of the situation in Slovenia, saying that despite “the increased political uncertainty” Slovenia was preparing seriously and responsibly to assume the presidency of the Council of the EU. He stressed Slovenia’s continued commitment to the EU, its enhancement and enlargement.

Pahor congratulated von der Leyen on the success of the recovery and resilience plan, which he sees as an exceptionally powerful tool to leverage development and a major opportunity for European countries to lead the field in green and digital transformation.

He also presented a letter initiated by him and his Italian counterpart, in which the presidents of 21 EU countries at the launch of the Conference on the Future of Europe on Europe Day called on EU citizens to get involved in the debate.

According to Pahor’s office, von der Leyen described the debate on the future of Europe as an exceptionally important part of the Slovenian presidency, as well as a great responsibility, and that it would be great if Pahor as a committed European would be involved in it as actively as possible.

Pahor also briefed von der Leyen on the Brdo-Brijuni Process summit that he had recently hosted.

Meeting with David Sassoli, the president of the European Parliament, Pahor pledged Slovenia’s commitment to Europe’s fundamental values. He stressed the importance of commitment to media freedom, freedom of speech and the rule of law as the fundamental EU values “to which we must remain faithful”.

No questions from journalists were taken.

Pahor said he and Sassoli had a candid and substantive discussion on the tasks ahead for Slovenia’s presidency. He assured Sassoli that he would personally engage for the success of the Conference on the Future of Europe, which he said should be inclusive and should secure progress on practical and visionary aspects by spring next year.

Sassoli noted the topics of economic recovery and other issues related to the Covid-19 crisis, and enlargement to the Western Balkans. He said he felt Pahor’s wish to enhance the European family, which energy was much needed.

The Slovenian president was later also scheduled to meet European Council President Charles Michel. He will then address Slovenian correspondents in Brussels.

Janez Janša gets another term as SDS head

Janez Janša gets another term as SDS head