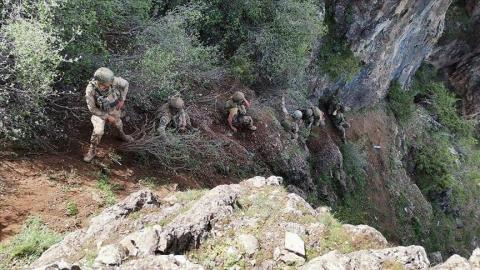 The Turkish security forces have neutralized a total of 18,140 terrorists since July 24, 2015, Defense Minister Hulusi Akar has said.

"As of July 24, 2015, every place that terrorists said 'inaccessible' was entered," he said while addressing military personnel at a dinner in the southwestern province of Muğla on June 6.

Since the beginning of this year, 1,212 "terrorists" have been "neutralized", he stated.

Turkish authorities use the word "neutralized" in statements to imply the terrorists in question surrendered or were killed or captured.

Emphasizing that Turkey respects the territorial integrity of all its neighbors, Akar said, "We have only one target; terrorists."

The minister emphasized that the Pençe Şimşek and Perçe Yıldırım operations in northern Iraq, which started on April 23 aiming to eliminate illegal PKK targets, has been successfully continuing as planned.

A total of 352 "terrorists" have been killed in Syria and Iraq since April 23 when the recent Pençe Şimşek and Perçe Yıldırım operations started, according to the minister.