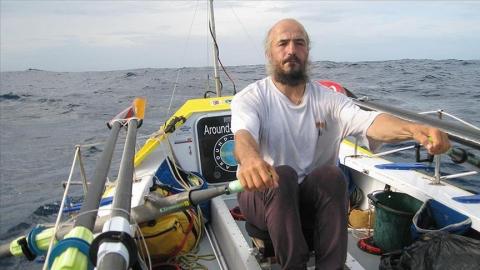 Erden Eruç, the holder of 15 Guinness world records, hopes to be the first person in history to row across the Pacific Ocean, from North America to Asia.

Speaking to Anadolu Agency in an interview, Eruç said that in two weeks, he planned to depart from Crescent City, California in a rowboat for Hong Kong, where he aims to make landfall in March 2022.

After climbing to the summit of Mount Kosciuszko in Australia with his wife Nancy, he rowed to Madagascar via the Indian Ocean and then on to Mozambique to climb Mount Kilimanjaro in 2011.

Eruç recounted that he later returned to the town of Bodega Bay in California to complete his circumnavigation attempt.

"I came back to the USA in Louisiana after visiting Namibia, Venezuela, the Caribbean Sea and the Gulf of Mexico while the whole journey took five years and 11 days," he said.

The 59-year-old said that after the loss of his close friend Goran Kropp, who fell while rock climbing together in September 2002, he told himself that "life is short."

"On the plane returning from Kropp's funeral, I drew a map of the world, marking the highest peak on each of the six continents. I told myself that I'd go to these peaks by muscle power as he climbed Everest," he said.

Eruç underlined that his journey would be important both for achieving his personal goals and raising awareness to the crisis that nature is experiencing due to human activities.

"The plastic problem in the seas is a big issue. We must reduce the use of plastic and ensure that plastic doesn't touch the seas," he said.

Eruç was born in the Turkish Republic of Northern Cyprus (TRNC) in 1961 as the son of a military...