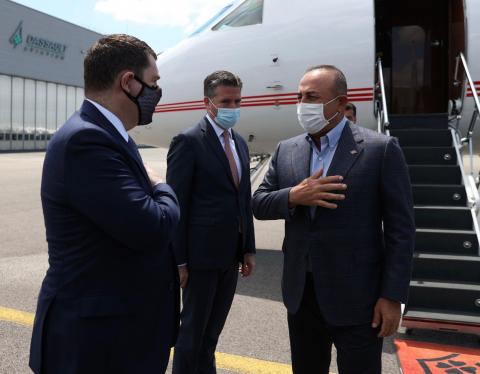 Turkish Foreign Minister Mevlüt Çavuşoğlu and French Foreign Minister Jean-Yves le Drian are set to meet on June 7 in Paris as part of their joint efforts to normalize relations after a stormy period that caused deep divergences on both bilateral issues and regional developments.

In a written statement, the Turkish Foreign Ministry informed on June 6 that Çavuşoğlu would pay a visit to France on June 6-7 upon the invitation of the French minister.

"During the meetings, the bilateral relations between Turkey and France as well as Turkey-EU relations will be discussed, and views on current regional issues and international developments will be exchanged," it said.

The minister arrived in Paris on June 6.

The ties between the two NATO allies have been strained since Turkey's cross-border operation in northern Syria in late 2019 and were further escalated during the summer of 2020 due to the Turkish-Greek tension in the eastern Mediterranean. Turkey's active presence in Libya and contribution to Azerbaijan's liberation of its lands from the Armenian occupation have also caused resentment in Paris.

On the other hand, the French deployment of naval forces in the eastern Mediterranean to support Greece and its continued alliance with Greece, Greek Cyprus, Israel and Egypt at the expense of isolating Turkey and the Turkish Cypriots from the hydrocarbon activities have angered Ankara.

Turkey and France sought to de-escalate the tensions in the last six months as President Recep Tayyip Erdoğan and French President Emmanuel Macron held a videoconference meeting in early March where they pledged to work together to resolve the differences.

The exchange of dialogue between the foreign ministries of the two countries recently...