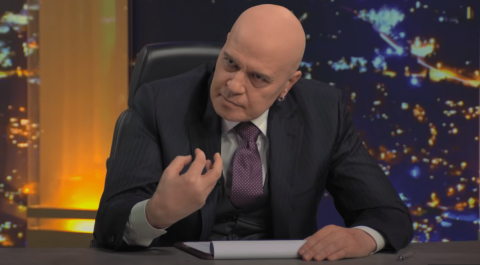 "I will not run for an MP because my place isn't in parliament, I have to hold responsibility for the people who are there and what they do there", the TV celebrity and leader of the popular opposition There's Such a Nation party announced on Facebook. "I may take responsibility for another institutional position, but more on that later," he added.

The statement has been interpreted both as an act of resilience and as cowardice by his supporters. "You've been hiding for months! You're terribly mistaken if you think you can govern us through social media!" was one response. Some appeared confused about whether he means he is chasing bigger aspirations or will gradually step down from politics.

After a minimal campaign and no media appearances from Trifonov beyond his own private TV channel ⅞, the party debuted as the second force in the country after winning 17 per cent of the votes in the inconclusive April 4 general elections.

He has not been seen in public for months, however, prompting speculation over his health. He tested positive for COVID-19 just around the election.

According to June 3 research by polling agency Market Links, There's Such a Nation could rival former governing GERB party for first place in politics; the polls show 21 per cent support for GERB and 17.6 per cent for There's Such a Nation, followed by the Bulgarian Socialist Party on 17.1 per cent. It remains to be seen whether Trifonov...