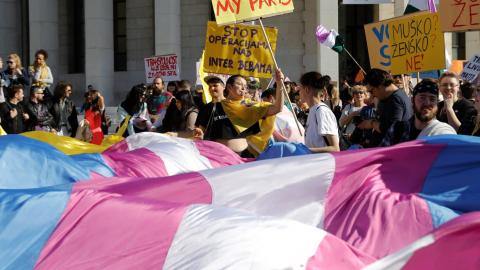 "Most often, we either cannot afford the necessary healthcare or the care we need does not exist in Croatia at all and there is no way of covering the costs of care in the countries where it does exist, or we face discrimination and human rights violations within the healthcare system," Topal told BIRN.

Surgery unaffordable for many

Advocates for the rights of transgender people rally outside the headquarters of the US Department of Health and Human Services to oppose a regulation proposed by the Trump administration, in Washington, August 2019. Photo: EPA-EFE/MICHAEL REYNOLDS.

Ahmetovic began taking hormones about 18 months ago, but financial difficulties since the onset of the COVID-19 pandemic mean he has not been able to take them as regularly as required.

He has been wearing chest binders for years and says surgery would change his life significantly, particularly in summer.

But, said Topal, in Croatia a mastectomy can only be performed in a private clinic at a price of around 25,000 kuna, roughly 3,300 euros, "an amount that is out of reach to many trans people."

"Many times I experienced humiliation from all sides," said Ahmetovic. "I wanted to get a job, and first they look at me for being a Roma and secondly because I am also a transgender person."

But Srecko Budi, a specialist in plastic, reconstructive and aesthetic surgery and who until recently worked at Zagreb's Dubrava public hospital, said that HZZO...