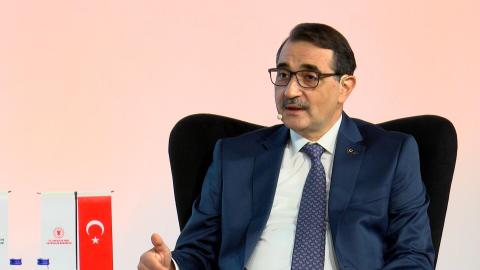 Energy and Natural Resources Minister Fatih Dönmez has said that another exploratory natural gas well could be drilled in a field in the south or west of the Sakarya Gas Field in the Black Sea this year.

"We are far from meeting all of our needs, but we will significantly reduce our imports," Dönmez said on June 7 at the fourth Turkey Energy and Natural Resources Summit.

"We can drill another exploratory borehole in the south or west of that field this year. The obscurity of such exploration activities is made with some estimations. But we are comfortable in the Black Sea right now. We are hopeful that we will find additional reserves in the Black Sea. I hope that we will start using that gas in 2023 unless there is a major setback," he said.

He is optimistic that additional resources will be found in the region to cover Turkey's residential power consumption for at least 25 years.

"In a field on such a scale, we can project a production and operation plan for 25 years on average. So we can speak about 15 bcm to 20 bcm of natural gas production per year at maximum levels," he explained.

Turkey's gas discoveries in the Black Sea could halve the country's annual natural gas import bill of about $12 billion with a production of 20 bcm per year, according to the Natural Gas Distribution Companies Association of Turkey (GAZBİR).