Turkey-US on same page regarding assistance to Syrians: US envoy 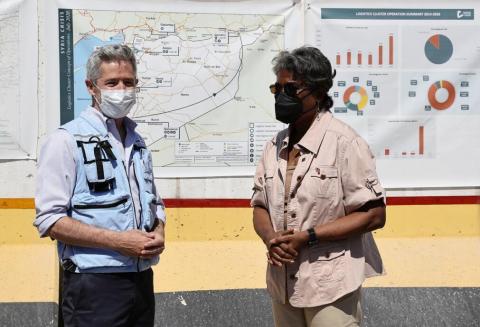 Turkey and the United States might have differences on some issues, but the two NATO allies are on the same page regarding the continuation of cross-border assistance to Syrians, U.S. Ambassador to the United Nations Linda Thomas-Greenfield told a group of journalists on June 4.

"We have a nuanced, strategic relationship with our NATO ally, Turkey. We agree on some areas, and we disagree on others. Maintaining humanitarian cross-border access into Syria is one place where our values are completely aligned," she said following her three-day visit to Ankara and the southern province of Hatay, which included a trip to the Cilvegözü/Bab al-Hawa border crossing.

"I have seen firsthand how Turkey is generously receiving refugees and working to integrate them effectively into the economy and the country," she added.

The closure of Bab al-Hawa border gate, the sole remaining access point for humanitarian aid to enter Syria, can cause "senseless cruelty'' to millions of Syrians, she also said.

"Without this border crossing, [Syrians] will die," she added.

Syria's close ally Russia has limited cross-border transfers of humanitarian aid in recent years on the argument that the Syrian government should control all assistance to the Syrians in need.

International crossings to the war-torn country were limited to the single border station, which is from Turkey to Syria's rebel-held northwest, over Russia's intervention into the U.N. Security Council.

Meanwhile, the U.S. seeks reauthorization of U.N. access at Bab al-Hawa and the reopening of other border crossings before the current U.N. Security Council mandate for humanitarian aid deliveries expires on July 10.

Thomas-Greenfield said she would have talks with her Russian...