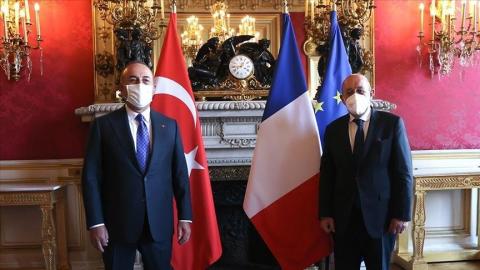 "We discussed our multidimensional relations and regional and international issues with my French counterpart Jean-Yves Le Drian," Mevlüt Çavuşoğlu said on Twitter after the meeting.

"We aim to strengthen our relations with France on the basis of mutual respect," he added, on the last day of a two-day visit to France at Le Drian's invitation.

"Turkey and France are two friendly and allied countries. And they will remain so. We must ensure that no misunderstanding comes to disturb this relationship of friendship to which we are sincerely attached," Çavuşoğlu wrote in an op-ed for French daily L'Opinion on Sunday.

On recent tensions between Ankara and Paris, Çavuşoğlu said this was unusual for two allied countries.

Çavuşoğlu said his current visit to Paris reflects this mutual will.

Later, in a statement about the meeting, the French Foreign Ministry said the two officials agreed to continue discussions on subjects of common interest.

The Turkish and French foreign ministers discussed issues related to Libya and Syria as well as the peace process in the Middle East, it said.

Cooperation with NATO ahead of a leaders' meeting on June 14 was also addressed by Çavuşoğlu and Le Drian, said the statement.

Turkey's relationship with the EU and issues of the Eastern Mediterranean were also discussed, according to the French...