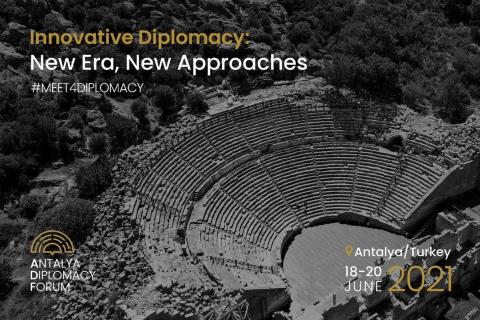 World leaders and dozens of foreign ministers as well as prominent diplomats, academics and journalists will come together to attend a two-day diplomacy forum in Antalya where all global issues will be discussed openly and innovatively, a senior Turkish diplomat has announced.

"What we mean by innovative diplomacy is that the forum will not just stick to the existing problems but also seek ways to resolve them. The participants will not only discuss the current issues but will debate about the future in an innovative and insightful way," Murat Karagöz, the ambassador and coordinator of the Antalya Diplomacy Forum, told reporters on June 8.

The forum will convene between June 18 and 20 under the title of "Innovative Diplomacy: New Era, New Approaches" through multiple panels and round tables devoted to regional issues and thematic subjects.

As for the regional issues, the developments in the Middle East and the Gulf, in the eastern Mediterranean, the Southern Caucasus, Africa, Asia and Europe as well as their future impacts on global affairs will be discussed at the panel. The ways to tackle extremism and discrimination, the global fight against terrorism and the topic of energy are some of the thematic issues that will be raised during the two-day forum.

The forum will be launched by the opening speeches of Erdoğan and Çavuşoğlu on June 18 and will be followed by a leaders' panel on global governance and regional solidarity.