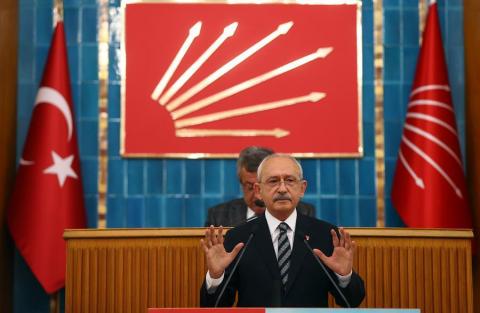 Main opposition Republican People's Party (CHP) leader Kemal Kılıçdaroğlu has criticized an indictment by a top prosecutor's office for the dissolution of the opposition Peoples' Democratic Party (HDP), stressing that his party does not embrace any move aiming to close any political party.

"One should not be afraid of expressing thoughts. If you see political parties as enemies and instruct the Supreme Court of Appeals to shut them down, there is no democracy there. Democracy should be for all parties," he said while speaking at the CHP'S parliamentary group meeting on June 8.

The nation should be the arbitrator regarding the actions of political parties, he said.

He emphasized that democracy also means a regime in which justice prevails.

"The respect we have for the national will is not just for the HDP," he said.

"When Ankara and Balıkesir metropolitan mayors were forced to resign, I defended their rights as well. Why? I am a person of faith. To me, who keeps the silence in the face of injustice is a mute devil," Kılıçdaroğlu stated.

The CHP leader suggested that the government aimed to change the agenda of the Turkish public.