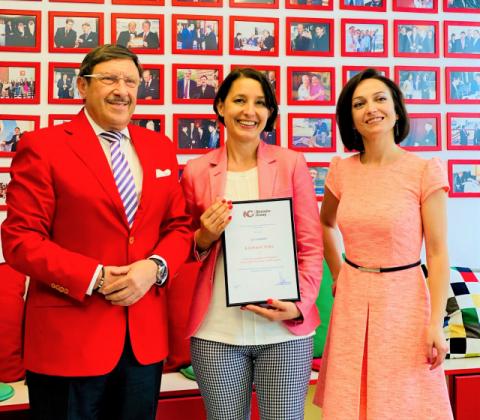 Katja Kostova, creator and director of ArtTheatre Berlin, has been awarded the „Honorary Ambassador of Novinite 2020" prize in the Culture category, in the annual ranking of one of the biggest Bulgarian English-language media channels - Novinite.com.

The CEO of NoviniteGroup, Daniela Ketenlieva, presented Katja Kostova with the award and congratulated her as the winner in the Culture category, wishing her to keep promoting the Bulgarian theatre abroad and to be successful in all her future endeavours.

Katja Kostova expressed her gratitude for the special award and confirmed that more projects related to the presentation of the Bulgarian culture in Germany are yet to come. In a few months, she is going to announce a new event, which will take place in Berlin.

The award ceremony took place at the office of M3 Communications Group, Inc., where Maxim Behar, CEO of the agency, also congratulated Katja Kostova and wished there were more such personalities for Bulgaria.

The Peshtera-born Bulgarian left for Germany almost 20 years ago together with her family. She indulged in her love of theatre almost immediately after settling there, but as a side activity, not as an activity through which she made a living. She started oprganizing productions of Bulgarian performances, concerts and literary readings of Bulgarian authors for the Bulgarian diaspora. She finances her endeavours entirely with her own funds, and earns her living with a lot of work. However, nothing can stop her from following the magic of theatre, which has captivated her since her school years.

In fact, the idea to actively promote the Bulgarian theatre in Germany was born almost 5 years ago...