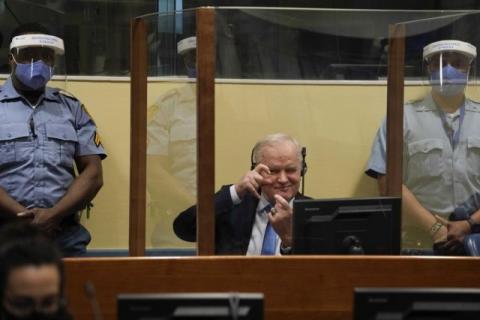 You can follow the broadcast on B92.net.
As a reminder, by the first-instance verdict of the Hague Tribunal, whose work was inherited by the Mechanism, Mladic was sentenced to life imprisonment in November 2017, after which both the defense and the prosecution appealed the decision.
The media previously reported that there was an incident in front of the building where the verdict is announced.
The trial of the VRS general began in May 2012 and ended on December 15, 2016. Mladic was arrested in May 2011, after 12 years of hiding, in Lazarevo, Serbia, and extradited to The Hague. On July 25, 1995, the Hague Prosecution filed the first indictment against Ratko Mladic with the first President of the Republika Srpska, Radovan Karadzic.
The indictment was expanded several times, and was finally specified in 2002. Since they were arrested three years apart, their trial began at different periods, while the indictments against them were developed and tried in separate proceedings.
In March 2016, Karadzic was sentenced in the first instance to 40 years in prison and is awaiting the final decision of the Tribunal in the detention unit in Scheveningen. As the supreme commander of the Serb forces in Bosnia and Herzegovina, Mladic is accused of planning, inciting and ordering all the crimes committed by his subordinates.
During the trial, Mladic denied guilt and tried to challenge the allegations of the prosecution and the testimony of witnesses with a team of his defense attorneys. Due to his poor health, his family and defense attorneys have repeatedly asked for medical treatment at large, but the Hague Tribunal and later the Mechanism have not adopted those requests to date.
It should also be noted that Prime Minister Ana Brnabi...