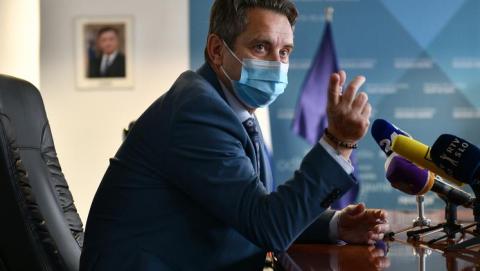 Ljubljana – Tomaž Vesel, the president of the Court of Audit, is seeking support among independent oversight bodies for a statement that urges against alleged political pressure and attacks on them that are carried out in the media and on social networks. Some government ministers have reacted to the statement, largely not sharing the view.

According to news portal Siol, the statement is being coordinated with representatives of the Information Commissioner, the Commission for the Prevention of Corruption, the Human Rights Ombudsman and others.

The Constitutional Court has already rejected signing such a statement, as reported by Siol and confirmed by Vesel.

The portal reported that Information Commissioner Mojca Prelesnik said she supported the content of the statement in principle, and the Commission for the Prevention of Corruption said that it agreed with Vesel’s call.

The statement carried by Siol on Tuesday expressed the concern that “our institutions have been repeatedly under political pressure recently”, which can be seen in “direct and often coordinated attacks in the media and on social networks”.

It adds that the many attempts at undermining democracy hinder independent oversight institutions in their efforts to properly do their job.

“Institutions overseeing the authorities represent a firm and strong state, which is the basis for successful social development, so it must be in the interest of all. But it is primarily the responsibility of politicians to protect them as key building blocks of the legal order.”

The statement urges all politicians to act in line with the attained values and trends towards the development of democracy in Slovenia, as the country is about to celebrate 30 years of statehood. “The situation must be calmed down to ensure respect for the institutions which are the immune system of the state.”

Several ministers have already responded to the statement, largely in a dismissive manner.

Taking to Twitter, Interior Minister Aleš Hojs said “Vesel has decided to protect his part-time non-profit business which brings him EUR 200,000 a year with the signatures of directors of some state agencies”.

This is in reference to Vesel serving as the chair of FIFA’s Audit and Compliance Committee, which came to media spotlight after the Court of Audit started auditing the public procurement of protective equipment following the outbreak of the coronavirus epidemic.

“This time he is not even sending independence figures to the dustbin of history, but wants to use the 30th anniversary of independent state to secure the acquired rights,” reads Hojs’s tweet.

Asked to comment at an unrelated event, Economy Minister Zdravk Počivalšek, who was at the centre of the protective equipment procurement story, declined to comment but also referred to Vesel as a person who has a side job in the afternoon.

Environment Minister Andrej Vizjak, attending the same event as Počivalšek, said that as a member of the government he had no knowledge of any such political pressure.

“Of course, I expect that every supervisor who experiences such pressure reports it,” he said, adding that he condemned any such pressure but opposed politicising it.

He said that oversight should be independent, but also professional and politically unbiased.

Vesel told the STA that the pressure on oversight institutions was horrendous, while the ministers’ reactions to their statement “speak for themselves”.