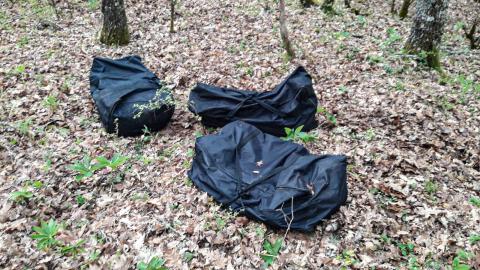 The task of some 71 officers was to crack down on the illegal migration of Albanians to Greece, but they have seized a significant amount of cannabis too, forcing traffickers to vary their tactics and seek out new routes, according to BIRN's findings. Some have abandoned the use of donkeys, preferring to hire young locals as couriers to carry small quantities of drugs on their backs.

"They looked like refugees," said Mihali, a resident of the order village of Peshkepia, describing young men with big backpacks trying to cross the border by foot.

"They used mules in the past but that became too well-known to police so now they walk."

Greece is the second biggest destination for Albanian cannabis after Italy, with Greek police estimating that about half of all cannabis confiscated in the country originates in its northern neighbour. Rugged terrain and a scarcity of paved roads on the border make life difficult for police patrols. For smugglers, the mountains are not easy to cross, but provide effective cover.

Greek police have identified three main zones of interests: the Thesprotia region in Greece, over the border from Albania's Saranda; the Derviciani village in the southern Albanian area around Gjirokastra; and the border towns of Permeti in Albania and Konica in Greece.

An Albanian anti-drug officer said the photos published by Frontex were just one of several cases identified on both sides of the border.

"They use black backpacks because they are not visible during the night but they can also carry up to 40-60 kg," he said, asking not to be named because he was not authorised to speak to the media.

In most cases the cannabis is...