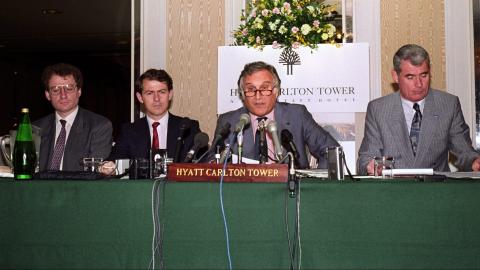 A day later, Cutileiro wrote a multi-page account of his talks with the three nationalist leaders to inform the European Community foreign ministers - and a single sentence on the meeting with the six opposition parties, affirming merely that it had taken place. He also invited the three nationalist leaders to dinner with his negotiating team in Stari Grad on the evening of February 14 - predictably, no invitations were extended to the other parties. When Cutileiro decided to host a second round of talks in Lisbon a week later, invitations were again issued to only the big three.

The meeting on the 14th was one that neither Cutileiro nor his boss, Lord Peter Carrington, the former British foreign secretary who had been named as chairman of the EC-sponsored Peace Conference, had particularly wanted. Carrington had visited Sarajevo to meet with Izetbegovic a week earlier, on February 6, to discuss the format of the talks he intended Cutileiro to chair. The Bosnian President had wanted talks to include all nine parliamentary parties on an equal basis, but Carrington - who seemed to know little about the country, to the point of confusing the names of the parties - preferred a narrower tripartite format, involving simply the three main nationalist parties.

It was not the first time in his tenure as chairman that Carrington had deliberately sought to narrow talks on the former Yugoslavia to a small number of high-profile leaders. He had begun the Peace Conference back in September 1991 with a mandate to solve the crisis in Yugoslavia as a whole, and hosted multiple plenary sessions to which representatives of all the Yugoslav republics, as well as the increasingly powerless federal government, had been invited.

But early on Carrington opted to push...