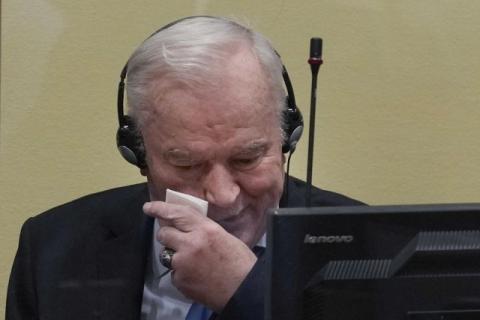 The Appeals Chamber upheld Ratko Mladic's first-instance verdict in its entirety.
He was sentenced to life in prison for genocide in Srebrenica, crimes against humanity in 15 municipalities in Bosnia and Herzegovina, siege, sniping and terrorizing Sarajevo from 1992 to 1995, and holding members of the UN peacekeeping mission hostage during the NATO bombing.
The second-instance verdict was passed with the dissenting opinion of Judge Niyamba on all counts.
The Chamber is satisfied that Mr Mladic is found guilty of genocide, a crime against humanity, hostage-taking and violation of the laws or customs of war, persecution ...
"He committed those crimes within the framework of four joint criminal enterprises, which aimed at the permanent removal of Muslims to the territory of Bosnia and Herzegovina," the judge of the International Residual Mechanism in The Hague stated.
The Chamber concluded that he failed to react, i.e. that without his interventions the mentioned crimes would not have occurred.

According to the statement issued by UN press team, Ratko Mladic was given a life sentence and was found guilty of genocide in Srebrenica, crimes against humanity and other crimes committed during war in Bosnia and Herzegovina. https://t.co/qF7Ix9YmVT

Speaking about the comprehensive Joint Criminal Enterprise (JCE), aimed at the permanent removal of Bosniaks and Croats from the territory of BiH to which Serbs laid claim, Nyambe pointed out that Mladic significantly contributed to a comprehensive JCE from May 12, 1992. The Appeals Chamber found that Mladic had failed to prove that the Chamber had erred in its method to drawn conclusions...