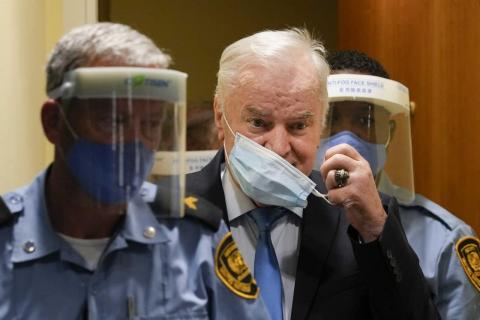 The court's appeals chamber upheld the initial verdict convicting the former Bosnian Serb military leader of the genocide of Bosniaks from Srebrenica in 1995, the persecution of Bosniaks and Croats across the country, terrorising the population of Sarajevo with a campaign of shelling and sniping during the siege of the city and taking UN peacekeepers hostage.

But Mladic was acquitted of genocide in five other Bosnian municipalities in 1992 -  Prijedor, Sanski Most, Kotor Varos, Foca and Vlasenica.

In a hearing held under pandemic-related restrictions and dogged by technical problems, with presiding judge Prisca Matimba Nyambe appearing via a video link, the court rejected claims from Mladic that he did not receive a fair trial, or that his health problems had been overlooked.

Mladic, 78, attended the trial hearing in person wearing a dark suit and blue tie, accompanied by a legal counsellor but without his usual legal team.

The court rejected Mladic's argument that he was not physically present during the killings of more than 7,000 Bosniak men and boys from Srebrenica in July 1995, and agreed with the initial verdict's finding that he was part of "a common criminal plan to commit genocide, extermination and murder".

It also rejected his claims that his actions in Srebrenica were actually "humanitarian".

"The appeals chamber, with judge Nyambe dissenting, considers unconvincing Mladic's allegations that he acted with the goal of performing a humanitarian evacuation of civilians," judge Nyambe said.