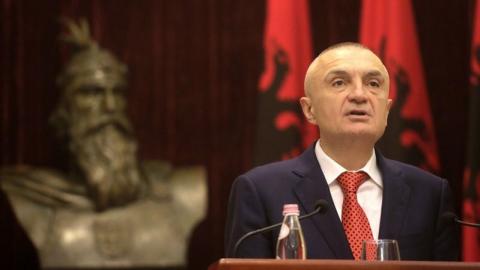 Albanian MPs on Wednesday voted to oust the country's president, Ilir Meta, though the final decision on the issue must go to the Constitutional Court, which will conclude if Meta will be removed from office before his term ends in until 2022.

Some 104 lawmakers in the ruling Socialist-dominated chamber voted for dismissal while seven voted against. Three abstained.

But minutes after the voting ended, the spokesperson of the President, Tedi Blushi, reacted on Facebook saying that his boss "not worried by this unconstitutional action" and that "Ilir Meta is more motivated than ever to protect the sovereignty and integrity of Albania from any attempt of traitors, collaborators and their tutors, who have been working for years against our country, Albanians and the national interest".

Only days after the last elections, when Edi Rama's Socialist Party won an unprecedented third term, the old parliament moved to oust the President, claiming he was guilty of violating the constitution with his actions and words before and during the elections. An inquiry commission investigated the claims and concluded that Meta had violated 16 articles of the constitution.

According to the report, the main object of the investigation was the statements of the President before and during the elections.

Rama's Socialists accused Meta of breaking the electoral silence, disturbing the public peace, inciting hatred and violence, endangering lives, interfering with and intimidating public institutions, damaging the image and reputation of the country and its relations with strategic partners.

Refusing to participate in hearings, Meta warned that he would not recognise "any unconstitutional and illegal decision or activity" of the parliament or any...