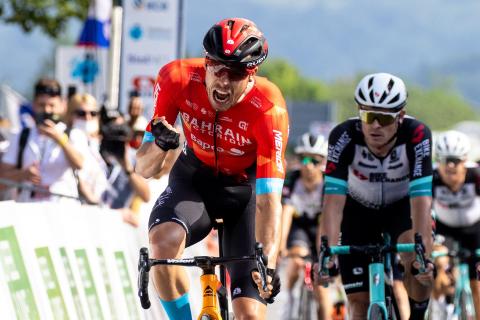 Rogaška Slatina – German sprinter Phil Bauhaus is the winner of the first stage of the Tour of Slovenia, beating the Spaniard Jon Aberasturi by mere centimetres in the final spring of the 151.5-kilometre stage on Wednesday. Rui Felipe Oliveira of Portugal was third.

“Our goal was to finish the stage with a sprint. The final kilometre was very fast. The team has done a fantastic job, we had everything under control all the time,” Bauhaus told TV Slovenija.

The first stage that was mostly flat led the riders from Ptuj through eastern Slovenia and to the spa resort of Rogaška Slatina.

Tomorrow, a 147-kilometre stage with two moderate climbs between Žalec and Celje is likely to see the first clash of the favourites, chief among them Slovenia’s Tadej Pogačar.