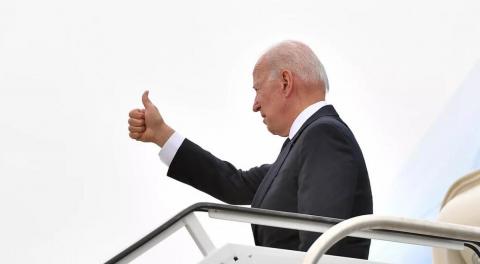 Joe Biden departs Washington early on June 9 on the first foreign trip of his presidency, launching an intense series of summits with G7, European and NATO partners before a tense face-to-face with Russia's Vladimir Putin.

Biden, 78, heads from the White House first to Britain ahead of a G7 summit in a Cornish seaside resort from Friday to Sunday.

From there, in rapid succession, the veteran Democrat will visit Queen Elizabeth II at Windsor Castle, fly to Brussels for summits with the NATO military alliance and European Union, then finish up in Geneva, where he meets Putin next Wednesday.

With the world still crawling out from under the wreckage of Covid-19, Biden is casting his diplomatic marathon as a return to badly needed U.S. leadership.

But beyond the immediate challenges of boosting vaccine donations to poorer regions and reinvigorating post-pandemic economies, Biden's agenda features the even bigger task of shoring up a somewhat-tattered group of democracies against Russia and China.

"This is a defining question of our time," Biden wrote in The Washington Post ahead of his trip.

"Will the democratic alliances and institutions that shaped so much of the last century prove their capacity against modern-day threats and adversaries? I believe the answer is yes. And this week in Europe, we have the chance to prove it."

Biden's pitch marks a return to a traditional U.S. worldview after four years during which Donald Trump flirted with autocrats and recast multilateralism as a dirty word.

And it's a message that the trip's choreography - setting out the military and economic might of the U.S. alliances before Biden sits down with Putin - will reinforce.

"He will go into this meeting with the wind at...