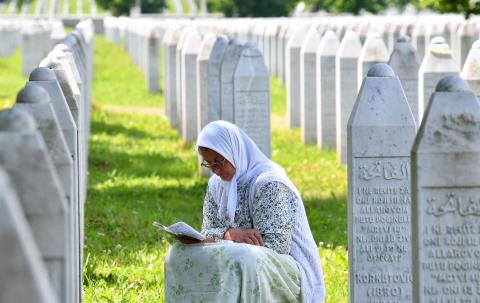 The ruling involving his 2017 convictions and sentence closed a grim chapter in European history that included the continent's first genocide since World War II, the 1995 Srebrenica massacre of more than 8,000 Muslim men and boys.

The now-frail Mladic, often belligerent at his court appearances in The Hague, showed no reaction other than a scowl as Presiding Judge Prisca Matimba Nyambe of Zambia said the panel had dismissed, by a vote of 4-1, his appeals of convictions for crimes including genocide, murder, extermination and terror for atrocities throughout the war that killed more than 100,000 and left millions homeless.

The 79-year-old former general is the last major figure to face justice from the conflict that ended more than a quarter century ago.

His former political chief, ex-Bosnian Serb President Radovan Karadzic, already is serving a life sentence after being convicted for the same crimes. Former Yugoslav President Slobodan Milosevic, who was accused of fomenting the ethnic conflicts that tore apart the Balkans in the 1990s, died in a U.N. cell in 2006 before judges at his trial could reach verdicts.

Serge Brammertz, the prosecutor who finally brought both Karadzic and Mladic to justice, said Mladic "ranks among the most notorious war criminals in modern history" who abused his position of power to commit crimes including genocide.

"Mladic should be condemned by all responsible officials in the former Yugoslavia and around the world,"...