Champions had spoken, it’s now time for legs to do the talking 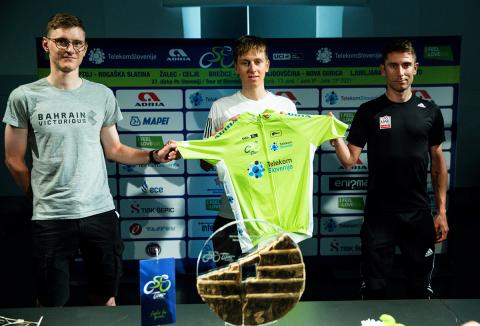 The 27th Tour of Slovenia officially kicked-off today in Ptuj and will finish on Sunday in Novo mesto. 139 cyclists from 20 teams - 4 of them are part of the elite World Tour - are on the start list. Special guests of the yesterday's press conference were Tadej Pogačar, Matej Mohorič & Diego Ulissi, and they all predict an exciting race.

Teams from all around the world were making sure that last details were in place and that everything was ready for the first of the five vibrant and likely very interesting stages. First name among the field is definitely Tadej Pogačar (UAE Team Emirates), defending Tour de France champion. Tadej is not shy about his ambitions on the home race: "For myself and my team, this is a preparation race before the start of the Tour. I was always close to the podium on Tour of Slovenia, now I definitely want to win. We'll see how strong my legs will be."
Tadej also explained that the team decided in favor of Slovenian tour a while ago: "After my last race I had a time to rest and do a lot of promotional obligations, then we went to inspect the Tour route and went on the altitude camp. Critérium du Dauphiné was our first choice, with Tour of Slovenia as a solid second option. About two months ago we decided in favor of Slovenia, which gave us more time for other obligations, I also enjoy racing here."

Matej Mohorič (Bahrain Victorious) also looks forward to the home race: "As a Slovenian I'm extremely proud that I can race in front of the home fans. Our team also has some staff and sponsors from Slovenia, which is why we're maximally motivated and focused on the result. Luckily, I wasn't injured in that Giro crash, but we did change the original plan to go to France straight from Italy. After I left Giro early, we had more time and we decided to do last preparations on Tour of Slovenia."

Current Tour of Slovenia defending champion Diego Ulissi (UAE Team Emirates) has had a rough winter and is now aiming to get back in the top form. Diego said today: "I'm always happy to be in Slovenia, I have a lot of fond memories of this country. I didn't have the best winter, which is why I'm happy to be racing at all, but I also hope my legs will be strong. We came here with a strong team, in total we won Tour of Slovenia three times. Tadej is our leader on the race, but we'll see what happens and we might also change our tactics."

Five stages - Ptuj- Rogaška Slatina, Žalec-Celje, Brežice-Krško, Ajdovščina-Nova Gorica & Ljubljana-Novo mesto - are all very vibrant and nothing is decided in advance. But all stages do have something in common - race will have a live broadcast around the globe and cycling fans will be able to see beautiful postcard of Slovenia. Promotional aspect of the race is very important, which is why organizers from Adria Mobil Cycling work hand in hand with Slovenian Tourist Board.
Maja Pak, MSc., Director of the Slovenian Tourist Board: "Tour of Slovenia is one of the biggest sport events in Slovenia, followed by millions of cycling fans around the world. For the fourth year in a row, Slovenian Tourist Board is partner of the race and promotes Slovenia as a green, active and healthy destination on Eurosport. It's expected that 18 million people will watch 10 hours of live broadcast on this global network. Our efforts in the area of sustainable development are included in the 'Fight for Green' slogan and, for the first time, also in the competition for the Best host of the race." Maja Pak also stressed the cooperation with Tadej Pogačar, first favorite for the overall victory on the race: "We expect bigger interest from the media and cycling fans thanks to participation of Tadej, also an ambassador of Slovenian tourism. We also did a special video with Tadej, in which he invites everyone to discover active experiences of our country."

Slovenian fans that will support the peloton in big numbers for sure, are of course most curious about the development of the race. Matej Mohorič explained that nobody will have it easy: "Tadej is defending Tour de France champion, but we're not in France. Of course he's favorite #1 and I believe he wants to win really hard, but same goes for another 150 cyclists. We will for sure make the effort to make it hard for him. It's an open race."

Both Slovenian riders predict an interesting and intense racing, the route with a lot of short and challenging climbs is perfect for all sorts of scenarios. Fans will add oil to the fire and together with the cyclists made a spectacle. We should also again let everyone know that they should follow the instructions of the police and the marshals and take appropriate anti-Covid-19 measurements.

Race director Bogdan Fink is very happy to have the race back on the Slovenian roads (after the 2020 edition was cancelled), and his words from the press conference are perfect to round up this report: "I'm sure that a great and nice sports week is ahead of us. I wish the riders all the best, and I hope to see everyone without any injuries on Sunday in Novo mesto."

The post Champions had spoken, it's now time for legs to do the talking appeared first on Slovenia Times.