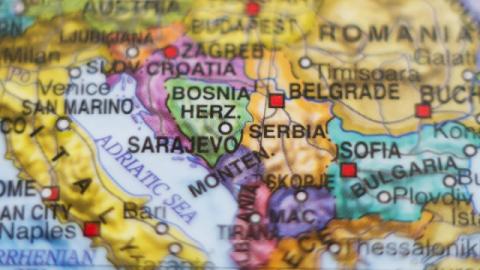 Arminka Helić is a member of the British House of Lords and served as special adviser to Foreign Secretary William Hague from 2010 to 2014.

Even after Brexit, there is one part of Europe where both the U.K. and the EU must urgently refocus their efforts and work together: the Balkans.

The southeastern European region serves as a microcosm of the challenges that U.K., the EU and allies across the West face globally, and as a significant test of our capacity to meet them.

In the Balkans, we see how systemic competition will unfold across the world: how authoritarian ideas gain a foothold, and then spread; how Russia and China are a destabilizing and corrupting influence; and how they push at boundaries. What once seemed far-fetched becomes possible, then plausible, then suddenly it is in the rearview mirror. Countries that should be on the path to prosperity risk instead becoming permanent centers — and exporters — of instability.

In March last year, as a planeload of Chinese medical supplies and doctors touched down in Belgrade, the Serbian president kissed the Chinese flag. The government in Belgrade has praised the Chinese government throughout the pandemic, and has received large shipments of Chinese vaccines and medical equipment in return. Russia was not far behind, with Sputnik.

For the past decade, China and Russia have been systematically growing and deepening their influence in the Balkans. Chinese investment is funding highly-polluting factories and providing local governments with video surveillance technology, while China actively cultivates the next generation of emerging leaders across the region. Russia meanwhile has played a spoiler role for years, supporting disinformation, propaganda,...