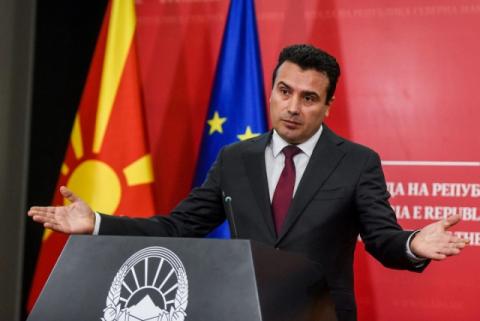 North Macedonia's largest opposition party, VMRO-DPMNE, has set up roadblocks in Skopje and about 10 other cities across the country, demanding the government release details of a roadmap being negotiated between Prime Minister Zoran Zaev and Bulgaria, Skopje Diem reported.

The party in opposition wants to force the ruling structure to tell the public what is being negotiated with Bulgaria and the type of concessions that are being offered.

According to VMRO-DPMNE, if the authorities accept the conditions in the Bulgarian Declaration in the negotiations with the EU, it will then become a European, not a bilateral problem.

The party's president, Hristijan Mickoski, said his party had to react because Zaev would otherwise accept everything, adding that the blockades will continue until the PM is forced to give up on his plan to make new concessions to Bulgaria.

"The protests of the desperate and idea-less VMRO-DPMNE experienced a debacle throughout the country. Barely 13 vehicles with 14 people, that is the average of today's 'protests'," the governing party SDSM responded.