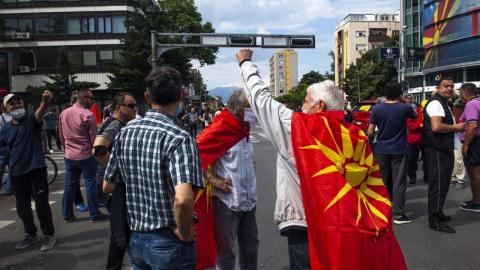 After the opposition blocked three main junctions in the capital Skopje for hours on Tuesday, and staged similar blockades in other towns, the party's vice president, Vlado Misajlovski, said the roadblocks will continue in the coming days.

"We took to the streets to raise our voice and to ask the government to show us what is being put on the table [in talks with Bulgaria], and whether they are again negotiating about Macedonian identity and language," Misajlovski said.

Supported by Brussels, the two countries are mulling a possible breakthrough in their history dispute that would allow North Macedonia to open long-delayed EU accession talks on June 22 in the EU Council.

"We are all supporting the EU bid but there is something more important than that, the Macedonian state, the nation, the citizens and off course, the [national] identity," Misajlovski said.

The opposition also accused the government of engaging in secret talks allegedly focused on incorporating the long list of Bulgarian demands from 2019 into the EU negotiating framework for the country, which would be to the detriment of national interests.

Bulgaria blocked the start of North Macedonia's EU accession talks last year, disputing its history, language and identity, which it insists has Bulgarian roots. Since then, Skopje has repeated that it cannot compromise over sensitive issues such as identity.

The opposition roadblocks started after, in May, the EU Enlargement Commissioner, Oliver Varhelyi...