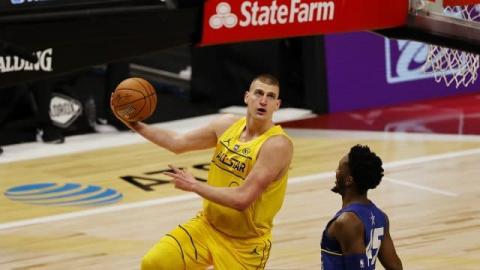 The 26-year old Serbian international Nikola Jokic on Tuesday was given the coveted Most Valuable Player, MVP, award by the US National Basketball Association league, the world's premier men's basketball league.

Jokic, born in Sombor, northwest Serbia, has been a candidate for the most prestigious award from the NBA since the beginning of the season due to his outstanding performances.

The Denver Nuggets centre player is only the third European after Germany's Dirk Nowitzki and Greece's Giannis Antetokounmpo to receive MVP recognition, and only the sixth non-American.

As the 41st pick from the draft, Jokic is also the lowest selected pick to achieve this recognition. "To be honest, I didn't even think about being in the NBA," Jokic said after winning the award.

"My goal when I started to play basketball back home was to play in the EuroLeague because that was the closest top league to my country. I could play in some big clubs in Serbia and grind my way up. But then the Denver Nuggets drafted me, and it was an opportunity for me to become an NBA player," he said.

This season Jokic, who is still playing the semifinals of the Western Conference with Denver, scored 26.4 points, had 10.8 rebounds and 8.3 assists per game.

The NBA superstar is known for being unusual among basketball players in the league for his humility, often making jokes in public. Jokic has also talked openly about his weight problems from the start of his career, and about considering stopping playing basketball.

Before Denver, Jokic, whose nickname is "Joker", played in Serbia for Belgrade-based Mega Vizura basketball club. He was also a member of the Serbian U-19 national basketball team that won the silver medal at the 2013 FIBA World...