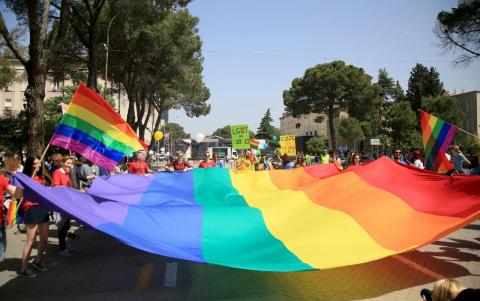 A lesbian couple who in January became mothers of a twin baby girls after ten years of co-habitation, the first known such case in Albania, face a quandary and a possible legal battle after the Civil Registry told them they could register the babies as born from a single mother but cannot both be registered as parents.

Xheni Karaj, head of the LGBTI Alliance, told BIRN the two women had rejected this idea and are preparing for a long legal battle in the courts.

In the meantime they face tabloid speculation about their aims.

Following a TV show, rights activists defending the women's battle were accused of "degenerating society" in what Karaj considered was a bid for click bait instead of a real debate on society's values.

"Not for the first time the media created a storm in a tea cup through headlines such as 'LGBTI community aim to remove the word 'MOTHER,'" Karaj told BIRN.

"We are only aiming to register two babies already born from a relationship between two mothers," she added.

"We were [just] trying to explain that in some countries gender-neutral words such as 'parent' are used instead of mothers and fathers, but ended up being accused of aiming to degenerate society," Karaj noted.

On Thursday, rights activists issued an open letter asking the pubic whether the twin baby girls deserve to be protected as citizens or not. "Parenthood is not only a biological event but a long process of sacrifice, dedication and service based on love," the letter reads.

The letter presents the mothers as Anisa and Elida.